Welcome to Round 2.6 of Moderately Acclaimed Albums 2019!

Good-spirited comments are encouraged, but not absolutely necessary.
Deadline = September 2nd at 10am EST.

If nobody else has voted yet I will vote for Initials B.B. Very close, 83-80.
Top

THE THE - SOUL MINING
Top 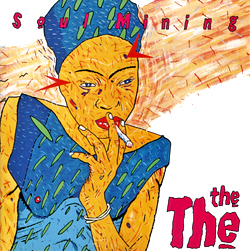 THE SOUND - FROM THE LION'S MOUTH
Top

I don't know the others that well but this album is a classic 80s album and has This Is The Day!
Depeche Malone Head Day
Top

The last two weeks had quite a few lesser albums, some of which advanced to third round. This week there are only good ones.
Top

There's no doubting that Mano Negra, along with The Pogues, were key in the development of folk-punk/world-punk but, while they have a similar sense of humour to Gogol Bordello, Manu Chao's ever-chirpy voice and the use of circus music on Puta's Fever make the silliness too much to bear at times. Mais quand même...Sidi H Bibi makes sense of the chaos, its Arabic instrumentation signposting the more eclectic approach the band and Chao would take in later years.

Street Hassle sees Reed go back to dancing to that rock and roll station, it won't save anyone's life this time but it's alright. It's certainly helped by its 'live' feel, like you're seeing his show at a crowded dive bar. The sprawling title track is the main attraction, with its hyper-realistic reportage of urban decay and decadence alternately gripping and bewildering.

Soul Mining has held up much better than many of its similarly produced contemporaries, mainly down to its use of synths only as texture, rather than the core component of the songs, showing its roots in rock (I've Been Waiting for Tomorrow...), blues (This Is the Day) and jazz (Uncertain Smile) while still being a breathing product of its time. Trying to get out of a rut seems a repeated theme but Matt Johnson always offers himself hope of improvement here, which makes sense of the album's aspirations to being soul music in its own way. Giant is the album's only duff note, lingering around for a good four minutes longer than it needs to.

From the Lions Mouth finds itself placed between Joy Division and bands like The Cult without providing the strong hooks and poetic alienation needed to make its gloom sound appealing. The album does get close to where it wants to be when it slows down, however, giving light and shade to New Dark Age, and purpose to the hesitant Silent Air.

Equally gothic but on a different scale entirely is Abyss. Dread and excitement run through the album, Wolfe seeming to battle against the cruelties of nature and human nature. The numbness of Grey Days feels like a respite once she starts to completely unravel from After the Fall onwards. Toe-tapping background music it is not but rarely less than morbidly compelling.

Abyss cuts deeper than From the Lions Mouth.
Waat a liiv an bambaie when the two sevens clash
Top

7 | Jesca Hoop | Hunting My Dress
5 | Bee Gees | Bee Gees' 1st
"The first word in this song is discorporate. It means to leave your body."
Top

Jesca Hoop's voice is a lilting, lyrical thing, which could easily be used for twee means. She does risk that on Murder of Birds but even Angel Mom, with its potentially mawkish subject matter of wishing her mother could come back to life to hear Hoop's music on the radio, wears its bittersweetness lightly and is better for doing so. Elsewhere, she trades in bouncy, reverb-heavy alt-pop with some killer choruses, the pick of which might well be Feast of the Heart.

Bee Gees' 1st is undoubtedly a skilled product of a band that, as we would later find out, could turn their hand to anything. Nothing stands out for me from other psychedelia/chamber pop of the time, however, and I find the vocals reedy.

Hunting My Dress skirts past Bee Gees' 1st.
Waat a liiv an bambaie when the two sevens clash
Top

It's a good lot of albums if I put Lou Reed at 7th... very solid group.
https://www.youtube.com/watch?v=wA15oCKCYHM
Top

But you did listen to Street Hassle, right?
Top

But you did listen to Street Hassle, right?

Yup. Never really liked Lou Reed to be honest with you. I don’t find much about his music that interesting at all.
Depeche Malone Head Day
Top

But you did listen to Street Hassle, right?

Yup. Never really liked Lou Reed to be honest with you. I don’t find much about his music that interesting at all.

I'll break the tie and vote for Puta's Fever
Top

Yup. Never really liked Lou Reed to be honest with you. I don’t find much about his music that interesting at all.


Yup. Never really liked Lou Reed to be honest with you. I don’t find much about his music that interesting at all.

Yeah I always felt bad because a lot of people love him.

I respect your opinion - no question there; I just mis-interpreted your original comment - sounded like you liked The The but may not have heard the other albums. I was just making sure.
Personally, I'm a big Lou Reed fan, but completely understand where you're coming from!
Top
Post Reply
29 posts • Page 1 of 1