Hello! Welcome to Round 4 of the 2021 AMF Tournament of Champions! Here are the rules for this game overall, as a refresher:

Each of the 27 competitors submitted one album and ten songs. The ten songs each compete in one of ten rounds, each with a different type of competition. Meanwhile, the albums will be rated (out of ten) as time goes on. After each round, each competitor will receive points based on their performance in the round. At the end of all ten rounds, the points will be totaled from each round and the rating of the album, and a winner will be declared!

This week's rules:
The fourth round is going to involve voting for your least favorite from a group of songs. You will vote for the three songs you liked the least using the in-forum poll function. The three with the least votes move on to next round. Here are your songs:


Please rate albums from this list out of ten. You can do this in any order, but please post in the most recent thread!

However I will be 'featuring' one album a week to make them more digestible. This week's album is:

Alright, in conclusion:
Select your three LEAST favorite songs from the least above. You have seven days from the time of this post (April 24th)! Have fun!

Additionally, rate albums from the list out of ten. You can do this at whatever pace you like, but post your ratings in the most recent thread! And you can always rate previously featured albums as well!
"The better a singer's voice, the harder it is to believe what they're saying."
Top

The Cranberries | No Need to Argue (1994) - 9
That is a shocking omission from the critics that this one is unacclaimed. I've got this at #195 on my greatest albums list.
Top

#180 on my all-time list. Omission from AM very surprising.
Top

Album:
The Cranberries 10/10
They give awards for that music? I thought just ear plugs. (Woody Allen in Annie Hall)
Top

The Cranberries | No Need to Argue - 9
https://www.youtube.com/watch?v=wA15oCKCYHM
Top

The Cranberries | No Need to Argue - 8
"On a mountain range, I'm Dr. Strange"
Top

I love Elliott Smith so my vote is definitely not that. I voted for Curt, Lou Reed, and Riot

the album was very formative in my exploration of 90s alternative rock and I probably would have rated it higher a few years ago. Some parts of this album simply havent aged well where as other parts have aged perfectly. 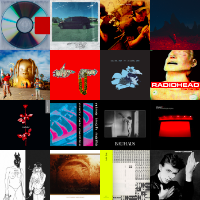 The Cranberries - No Need to Argue 5.6
My highlights: Twenty-One

My marks for the songs will be forthcoming later in the week...
I'd give it all gladly if our lives could be like that
Top

Possibly the best week so far! Four of these songs feel like they could’ve come from my list (Dj Shadow, Elliott Smith, Pixies and Wild Beasts.) Voted Another Time, Regrets, and Its a Long Way there, but all three are wonderful as well.
"The better a singer's voice, the harder it is to believe what they're saying."
Top

The Cranberries | No Need to Argue: 5/10
Highlights: "Zombie", "Dreaming My Dreams"
Top

Attempting to catch up a bit:
To Mother - 6
No Need to Argue - 7
"The better a singer's voice, the harder it is to believe what they're saying."
Top

The Cranberries - No Need to Argue: 8
If you can have a crush on a voice, I certainly have one on Dolores O'Riordan's. She and her accent really make this album, which would otherwise be fine, if not all that remarkable. The band is mostly just competent, but when I hear O'Riordan sing calmly and nostalgically on Ode to My Family or just wail Zombie in her unique way it just all comes together.
So yeah, perhaps it is a bit strange this one doesn't rank, even if I think all those 10's and 9's seem a bit much (my 8 is on the lower end of that rating). But I don't think The Cranberries were ever all that fashionable with the critics in their own time.
Top

Too uneven song materiel on "No Need To Argue" and the songs doesn't "grow" on me. So it's 5.5 here. Sorry for not joining the party.

Is the band put together around the singer?
Top

Only about a day and a half left!
"The better a singer's voice, the harder it is to believe what they're saying."
Top

I miswrote, I'm just ordering the songs, not marking them...that Curt Boettcher tune is worth rescuing from obscurity, shame it's not clicked with many others:

About twelve hours remain!
"The better a singer's voice, the harder it is to believe what they're saying."
Top

Looks like DJ Shadow and Lou Reed advance for sure, check out the tiebreaker to chose which of Elliott Smith, Pixies, and Wild Beasts advance!
"The better a singer's voice, the harder it is to believe what they're saying."
Top
Post Reply
17 posts • Page 1 of 1